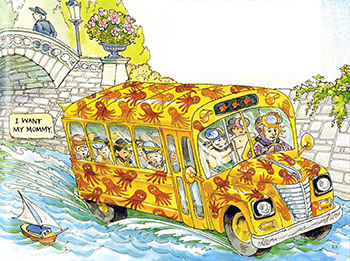 Seat belts, everyone!
"Gimme a hundred
I won't take under
It goes like thunder
It's a bus-age wonder!"
— The Who, "Magic Bus"
Advertisement:

A vehicle which is capable of much more than you would expect from a standard vehicle of that same make and model. May or may not actually be alive to some degree or another (sentient AIs don't count, except when they're not supposed to be sentient in the first place). A Wizard Did It or Clap Your Hands If You Believe is basically inherently part of the description as to why it has these abilities; mundane causes like user customization/upgrades don't count.

Typically has quite a bit of overlap with Cool Car, Cool Ship, etc.

Trope Namer is The Who's song "Magic Bus," although that is not an example.