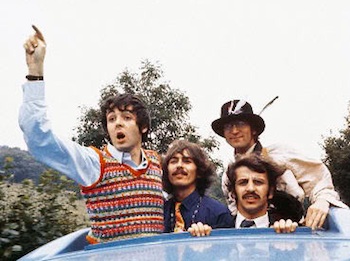 Paul desperately trying to deny that this movie was all his idea.
"When a man buys a ticket to a magical mystery tour, he knows what to expect."
Advertisement:

The Beatles's third film, and definitely the weirdest.

The film starts out as Mr. Richard Starkey, who is constantly bickering with his aunt, purchases a ticket to the titular mystery tour. Once on the tour bus... stuff happens, allegedly at the whim of "four or five magicians," and in the end everyone goes to a strip club.

Basically, the Beatles and a bus full of other people drove around for two weeks, wrote the script on the way, filmed things on a whim and hoped something magical would happen. It didn't work. Legend has it that many of the incidents and complications that plagued the shoot were more interesting than the film itself.

It was envisioned for theatres, but instead aired on BBC 1 on December 26, 1967. This hurt the film because that particular channel wasn't airing in colour yet. (Even if it had appeared on BBC 2, which was airing in colour, very few viewers owned colour sets.) It was especially bad for the "Flying" sequence, which was simply filmed abstract colour-shapes... So the project became their first flop, signalling all the events that would eventually lead to the band's break-up in 1970. As time went by Magical Mystery Tour has been re-appreciated as a charming time document with surreal comedy that was ahead of its time. Its Cult Soundtrack has been Vindicated by History too, for having some of the band's greatest hits, including "The Fool on the Hill", "I Am The Walrus" and the Title Track. The soundtrack album has its own entry.