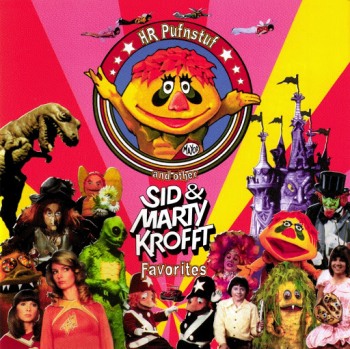 In the 1970s, Sid and Marty Krofft were to live-action children's TV what Hanna-Barbera was to animation. Their first series, H.R. Pufnstuf, debuted in 1969 and established their production style: fantastic creatures, usually with thick fur or oversized heads; a "stranger in a strange land" motif; fearsome but comical villains, and clever wordplay and visual gags. Of course, not all of those elements appeared in all Krofft shows. And what on earth do you mean, their work wasn't made on drugs?
Advertisement:

Other Krofft series included The Bugaloos, Land of the Lost (both the 1974 original and its 1991 revival), Lidsville, Far Out Space Nuts, Sigmund and the Sea Monsters, The Krofft Supershow (featuring several segments including Electra Woman and Dyna Girl), The Brady Bunch Variety Hour, DC Follies, and the infamous Pink Lady and Jeff. Before producing series on their own, the Krofft brothers designed the costumes for Hanna-Barbera's The Banana Splits.

Possibly the most interesting piece of Krofft history was their 1973-77 lawsuit against the McDonald's corporation. When it couldn't get the Kroffts to license H.R. Pufnstuf for use in McDonald's commercials, the hamburger chain blatantly plagiarized Pufnstuf to create "McDonaldLand" in 1971. For more information, see this article

at Cecil Adams' The Straight Dope, or this one

During the mid-1970s, they had a theme park in downtown Atlanta, called The World of Sid and Marty Krofft, notable for being the world's first indoor amusement park; it closed within six months. The facility that housed it, the Omni International, was later bought by Ted Turner and became the new HQ for CNN, the CNN Center.

Bob Odenkirk and David Cross' Mr. Show parodied the What Do You Mean, It Wasn't Made on Drugs? nature of their productions in a sketch about Sam and Kriminy Kraffft, a pair of producers showing the unaired pilot for their show The Altered State of Drugachusettes.

In 2015, their Edutainment series for Nickelodeon Mutt & Stuff became an unexpected hit, resulting in a 40 episode first season order and the commissioning of a brand new special that saw the Mutt & Stuff cast visited by the Pufnstuf cast (and revealed that Mutt & Stuff himself is Pufnstuf's nephew). The mind boggles.