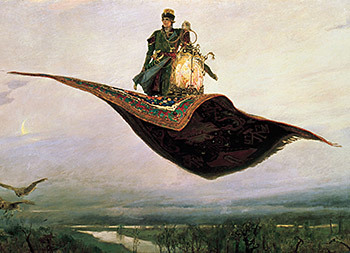 Riding a Flying Carpet, an 1880 painting by Viktor Vasnetsov.
Advertisement:

A Magic Carpet or Flying Carpet is a carpet that can rapidly transport passengers who sit on top of it, usually by flying through the air. It typically features a Persian carpet design. The Other Wiki gives more details

A common artifact found in settings inspired by the Arabian Nights.