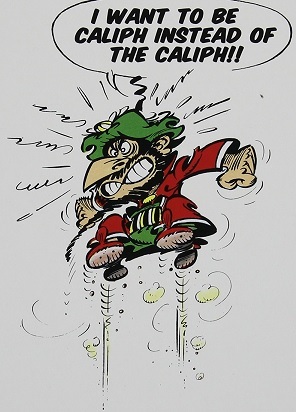 Iznogoud and his Catchphrase.
There was in Baghdad the Magnificent a grand vizier (5 feet tall in his pointy slippers) named Iznogoud. He was truly nasty and had only one goal...
Iznogoud: I WANT TO BE CALIPH INSTEAD OF THE CALIPH!
Advertisement:

Iznogoud (1962-) is a Franco-Belgian Comic book series created by René Goscinny (of Asterix fame) and illustrated by Jean Tabary (who took over writing the stories after Goscinny's death in 1977; following his retirement, his son Nicolas took over the art while the stories were penned by various writers, including Nicolas' brother Stéphane and sister Muriel). The title character is the scheming, ambitious and power-hungry Grand Vizier of the fictional Caliph Haroun El-Poussah (Haroun El-Plassid in English). His obsession is to depose the Caliph by hook or by crook, and to set himself up as the new Caliph in his stead.

In order to achieve this goal, he tries every dirty trick, but fails every single time due to either uncommonly bad luck or his own greed and incompetence. He is "assisted" by his long-suffering henchman, Dilat Laraht (Wa'at Alahf in the English translations of the comics, Adulahf Alot in the translation of the Animated Adaptation).

The comic was given a 52 episode Animated Adaptation in 1995, and a live-action film in 2005, entitled Iznogoud and starring Michaël Youn as Iznogoud and Jacques Villeret as the Caliph.