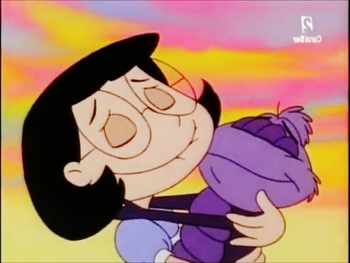 A 1992 animated short named for the nursery rhyme of the same name, originally shown in theaters preceding Bébé's Kids. In 1994 it was picked up as a TV series, which aired on the USA Network.

The short subject dealt with the titular spider befriending a shy little girl but invoking the fearful wrath of the girl's teacher, who sends an exterminator over. The exterminator deploys any means possible to get rid of the spider, only (like Wile E. Coyote) to fail miserably. The TV series resumes the premise, with the girl now named Leslie McRoraty and the teacher Miss Adrienne.

Tropes covered by the short and the series:

Tropes exclusive to the short:

Tropes exclusive to the series: