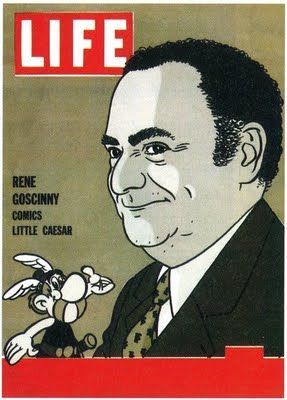 Goscinny by Floc'h.
"I have never addressed myself especially to children, young people or adults, I have done things which seemed to me to amuse everyone."
Advertisement:

René Goscinny (14 August 1926 – 5 November 1977) is one of the most famous writers of the French-Belgian school of comic books. He is the creator, among other series, of Asterix, Iznogoud and Les Dingodossiers (with Gotlib), and significantly contributed to the success of Lucky Luke.

Born of Polish Jewish parents who had moved to France shortly before World War One (Gościnny means "hospitable" in Polish), Goscinny spent his early years in Argentina (several of his relatives who had stayed in Europe were killed in The Holocaust) where, at age 18, he started working as a writer and illustrator for a French newsletter in Buenos Aires. He moved to the US in 1945, came back to France for his military service, and returned to New York where he got to work alongside the founders of MAD.

He met Morris, creator of Lucky Luke, in 1949, and in 1955 started writing Le Petit Nicolas, a series of short stories about a schoolboy's daily life. Illustrated by Sempé, Le Petit Nicolas became a perennial favorite of the French readership; it was adapted to movie format in 2009. In 1959, with comic book artist Albert Uderzo, he created what would remain his most famous series, Asterix.

In the 1960s and 1970s, he was a key figure of the weekly illustrated magazine Pilote and wrote the scenarios of Iznogoud, Les Dingodossiers and other series. His sudden death from cardiac arrest in 1977 resulted in several works where he Died During Production; of those series that went on without him, most never regained the level of creative quality that he had provided.

His favorite tropes included Anachronism Stew, Affectionate Parody, Running Gag, Shout-Out, Hurricane of Punsnote He was actually noted to adapt his wordplay Depending on the Artist. Morris wasn't too fond of puns so Lucky Luke was fairly low on them, Uderzo enjoyed them and Asterix's tone reflects that, and Tabary's outright love of it turned Iznogoud into a puniverse., Ineffectual Sympathetic Villain, and Villainous Breakdown. He is also responsible for a noted Parody Displacement when his parody of Barbe-Rouge in Asterix (the hapless pirates whose ship always gets sunk) ended up becoming more famous than the original. He was himself victim of one, as his short, manic, bloodthirsty alter ego in Achille Talon fits the Da Editor image so well people often thought it was true to life.