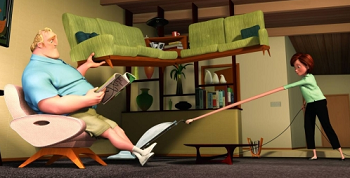 Super Strength and Super Stretching: Great for fighting crime. Even better for housecleaning.
Cyclops: Here, Jean, allow me to cut you a piece of cake in my own way.
Jean: Why, thank you, Cyclops, but that's a bit like using an elephant gun to kill a house fly.
— X-Men #4
Advertisement:

Awesomeness put to mundane use. Just let loose your fire conjuring hands and... cook, or use ice powers to instantly chill your favorite drink, or something. Hey, sometimes With Great Power Comes Great Perks.

When you really get down to it, this is actually quite sensible — it's not like superheroes and superheroines are saving the world/fighting for their lives 24/7, and in most cases, it's not like they can simply "shut off" their powers. If it's more convenient, then why not make your life a little simpler? Call it "practice" if you have to justify it (or just ask them "What do you mean, it's not awesome?"). Similarly, if Everyone is a Super, not everybody will be keen on fighting or committing crime. That doesn't mean they won't find some way to make use of their abilities.

Failure to see possible uses other than this one is a form of Misapplied Phlebotinum. Overpowered characters with a job description like this become Super-Powered Robot Meter Maids. Characters who are outright omnipotent who fall to this trope are All Powerful Bystanders. Martial Arts for Mundane Purposes is a subset of this trope, for when martial arts abilities are used for reasons other than fighting. Also an opposite of sorts to Cut Lex Luthor a Check, Inverse Law of Utility and Lethality, Reed Richards Is Useless and Useless Superpowers. If this is applied to killing someone (such as, say, a gigantic nuke against a feeble human), it may become There Is No Kill Like Overkill.

Diametric opposite to Just Think of the Potential!. For an adult variation, see Power Perversion Potential. For a sister trope which takes this up to eleven, see Boxing Lessons for Superman. When done with wishes and boons, this might be a Mundane Wish. If the mundane utility would make for a career in its own right, then These Look Like Jobs for the Superman. And if the mundane utility is used for sports, then it's Muggle Sports, Super Athletes (usually defied).

Also compare Utility Magic, for when the primary purpose of something which is awesome (magic, in this case) is something mundane, and Utility Weapon, for when something is designed to function as both a weapon and a tool. Compare Priceless Paperweight, which is using a priceless or important item for a mundane task.