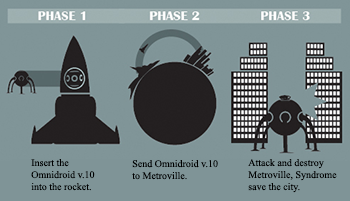 "Ladies and gentlemen, this is not my doing! These robots are Dr. Light's creations. This proves he's had evil designs on the world all this time! I, Dr. Wily, have created my own robots to stop Dr. Light. But only your donations can help me complete them."
— Humanitarian Dr. Wily, Mega Man 9
Advertisement:

A type of con where the giant monster attacking local villages ultimately turns out to be the property (or at least in the employ) of the very same hunters who conveniently showed up to exterminate it (for a nominal reward).

Before the culprit's racket is revealed, it seems like there's going to be an Always Someone Better plot. If the scammer is the protagonist, he will soon have to face the real thing and become a true hero. Either way, it's a common karmic punishment for this character to encounter the real thing, sometimes thinking it's his own hoax used against him. The real thing is usually none too impressed with the imposter, and doesn't hesitate to show him what it's really capable of.

In Super Hero stories, leaving aside conventional crimes, nothing will disgust the members of a superhero team/community more than catching one of their own pulling this scam. Someone would likely say "You mean you endangered innocent people for a self-aggrandizing publicity stunt?!" just before they dropkick the offender out of their organization.

Subtrope of Engineered Heroics. The monster is often a Punch-Clock Villain putting on a Monster Façade — in this case the monster and the "hero" Fake a Fight. For legitimate heroes doing a legitimate paid job, see Punch-Clock Hero. See also Heroism Addict.