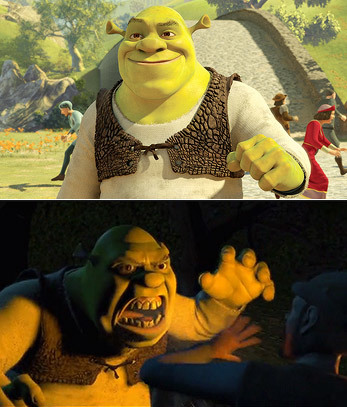 "This is the part where you run away."
Advertisement:

There is a creature without any malicious intentions. It just wants a quiet, peaceful life, maybe a few friends. But the problem is: it is enormous and looks monstrous. Thus, the people are afraid of it and run at it from sight, or grab their Torches and Pitchforks to fight it. The poor Gentle Giant or Reluctant Monster can try and convince the people to not be afraid, but its efforts are fruitless. So sometimes, it decides to give the people exactly what they want: a gigantic, fearsome, bloodthirsty beast. It might chase after people with a Mighty Roar and cause some property damage, but it is all just an act.

The reasons why a monster can do this can vary. Maybe it got tired of people responding with fear and Took a Level in Cynic. Maybe it is afraid of people, so it keeps up the terrifying image to protect itself. Maybe it's putting on a show to help a friend or an accomplice (for example, to pull a Monster Protection Racket). Maybe someone pays them to put on the act. Maybe it simply prefers solitude. More often than not, there will be a good-hearted character who sees through the monstrous act, learn that the monster is Not Evil, Just Misunderstood and befriend it, delivering An Aesop about not judging a book by its cover. You still have to Beware the Nice Ones, of course.

The trope shares some similarities with Scarecrow Solution: in both times, someone harmless pretends to be something terrifying. The main difference is that in a Scarecrow Solution, the monstrous bluff is created by a small, weak character to scare someone stronger than them, whereas a creature putting on a Monster Facade is actually strong and would be capable of hurting its victims, it just prefers not to.

Compare Hidden Heart of Gold, where a human pretends to be meaner than they really are and doesn't want anyone to know about his true, nice nature, and Mean Character, Nice Actor, when the monstrous act is the part of a show. Compare and contrast "Scooby-Doo" Hoax, where a human with malicious intentions pretends to be a monster. Also compare Then Let Me Be Evil, when the creature goes one step beyond, and actually becomes a monster after constantly being treated like one. As The Reveal that the monstrous behavior was just an act is often near the end, beware of spoilers!