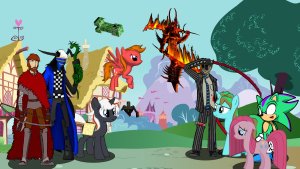 Started in July 2012, Go Through the Alphabet Before Someone Posts a My Little Pony Picture quickly became a popular hangout for both Bronies and Non-bronies alike.

The point of the game is simple, to the point of being Exactly What It Says on the Tin. The players have to try and reach Z. They have to reset and start at A whenever someone posts a My Little Pony picture. Over time the regulars have put a number of unofficial rules in place to keep the game from becoming too easy or devolving into a spamfest.

Shortly afterwards some of the regulars started using the thread for their ongoing Roleplay. It's unknown exactly when the RP started, but legend says that it used to run over several other threads before coming to it's current home. It's first appearance in this thread can found over here

It was the most replied active topic in the Minecraft Forums Forum Games section and the second most viewed.

Due to one of the member's posting habits the Minecraft Forum thread has been locked. It can still be viewed but no one can post on it. However, the Thread has been moved to a new forum. TheTrueMultiverse

is the new home for the main thread as well as the accompanying roleplay.

There is also an IRC channel but it has unfortunately gone unused. #MLPAlphabetRP

The thread has had more than it's share of characters. Most of them are listed below.

These are the characters that the authors mainly control.

These characters are either neutral or good, and are not always being controlled. They may only be mentioned, and not actually seen. Note that some characters are listed several times. This is because they are separate characters.

These characters are all evil. Their only purpose in existance is to pose a challenge to or fight the players characters. Apart from this, they share the rest of their characteristics with NPC Characters.

The RP has gone through a number of different story arcs, as well as a number of smaller side arcs. The story arcs usually involve a large goal or enemy the main characters band together to accomplish or defeat. The side arcs usually involve NPC characters interacting with each other. Below can be found a list of recent arcs in the order of occurrence.

Note: These lists are incomplete and some information may be missing or incorrect.