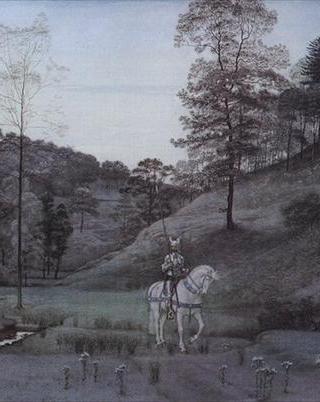 The White Knight by Walter Crane
"While evil flourishes and wrongs grow rank, while men are persecuted and women wronged, while weak things, human or animal, are maltreated, there is no rest for me beneath the skies, nor peace at any board or bed. Farewell!"
— Solomon Kane, The Blue Flame of Vengeance
Advertisement:

The medieval Knight Errant stems from the Chivalric Romance, where individual Knights in Shining Armor would wander the land, searching for evil to slay and ladies to rescue, most often guided by the Damsel Errant. Since then, knights have declined in popularity, but the Knight Errant is still around in full force — instead of knights, they are now often Samurai, Cowboys, or Samurai Cowboys.

Historically, a knight errant would refer to a landless knight who would travel in the service of his lord and hoping to earn his own land. If he is traveling because he was sent by someone it might be a case of My Master, Right or Wrong. They are basically the feudal equivalent of The Stateless.

Knights Errant have some or all of the following traits:

There are many variations on the Knight Errant outside of Knights In Shining Armor. The Western very often stars a Knight Errant in the form of a wandering gunslinger or cowboy. Samurai are often, and Rōnin are almost always, Knights Errant. Wuxia heroes are Knights Errant. Because of the shared archetype, stories about one type of Knight Errant can easily be Recycled IN SPACE! — New Old West and Space Western are examples of this. Some people regard Superheroes as the modern-day version of knights errant.

Wuxia novels, films, plays, etc. are full of such figures, and the term even translates to something like "wandering knight". This derives from Chinese knighthood

, which isn't a widely-known subject in the West.

Adventuring parties from tabletop RPGs aren't normally an example of this; a key part of this trope is that the knight is solitary. "Solo" campaigns, with a single player and a DM, are however not uncommon. Many open-world RPG video games are basically built around being a Knight Errant. The player is given a Wide-Open Sandbox populated by people who need help, and they wander around finding those people and solving their problems.

See Knights Errant for the Webcomic.