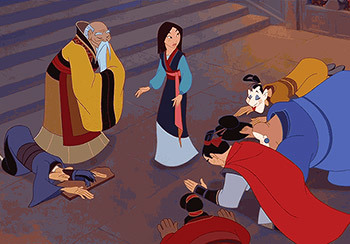 "I've heard a great deal about you, Fa Mulan. You stole your father's armor, ran away from home, impersonated a soldier, deceived your commanding officer, dishonored the Chinese army, destroyed my palace, AND...you have saved us all."
"My friends... you bow to no one."
— King Elessar a.k.a. Aragorn, Peter Jackson's The Lord of the Rings: The Return of the King
Advertisement:

In many stories involving royalty (but particularly movies), there is a scene where someone is standing in a crowd of people. As part of a Moment of Awesome, and sometimes preceding an Awesome Moment of Crowning, the camera pulls back, and the entire crowd kneels before the character, moving in a pleasingly symmetrical wave as they do so. The character, who may have appeared minor seconds before, becomes the focus of the scene. This is usually because of one of two circumstances: either the character is a king, princess, or someone else to whom they should normally kneel, but in an unexpected situation; or the character is someone to whom they would not normally kneel, but unexpectedly do.

In the first instance, the character is a King Incognito who has just thrown off his disguise, or the subject of a Really Royalty Reveal. In the second, the actual king may have humbled himself and bowed to the lowly hero who has just saved the kingdom. By courtesy, everyone else will imitate the king and go along with it. Commonly, in this case, an antagonist will also be forced to kneel to the hero, whom they have recently insulted.

This trope is a very sharp contrast to Kneel Before Zod.

Note: Beware of SPOILERS in the examples below!

The Emperor of China and all present bow before Mulan.

The Emperor of China and all present bow before Mulan.