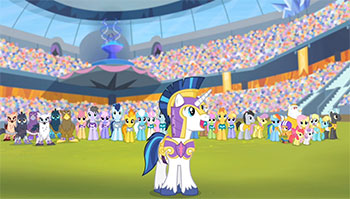 The Mane Six, along with the rest of the athletes from Ponyville, head to the Crystal Empire for the start of the Equestria Games. Rainbow Dash gives everypony on the train a pep talk on the way, telling them all to do their best to be awesome.

Spike takes all of the athletes' luggage, when he's taken away by two crystal pony guards. Spike is treated like royalty in the Crystal Empire, as Twilight and Cadance explain that the crystal ponies recognize Spike for getting the Crystal Heart back into place. For this reason, Cadance asks Spike to light the ceremonial torch to start the Equestria Games, which Spike accepts. During the opening ceremony, Spike climbs up to the torch to light the fire, but is overcome by crippling stage fright, leaving him unable to light the torch. To save him from embarrassment, Twilight secretly casts a fire spell that lights the torch.

Later that day, Spike has come to the conclusion that he can light fires with his mind, until Twilight tells him that she lit the torch. This causes Spike's ego to deflate, and he wants to prove himself another way. During the games, Rainbow Dash and Spitfire run the anchor leg of the aerial relay for Ponyville and Cloudsdale, respectively, and Spitfire is first across the finish line. Spike, wanting to prove himself, goes onto the field to sing Ponyville's anthem, but realizes too late that he has to sing the Cloudsdale anthem instead because that team won the gold. Having never heard it before, he tries to improvise a song on the spot, to the audience's (except Pinkie Pie) disdain. This causes Spike's ego to sink even lower, and he comes to feel like everypony is doubting him.

The final event of the Equestria Games is ice archery, and Ponyville has no one representing them in it, so Spike stays behind in a hotel room, packing things up and sulking about his performance. When Twilight learns that Spike is hiding away, she goes to the hotel room to persuade him to go to the arena. He agrees, but still feels like everypony will doubt him for ruining the games; Twilight tells him that his mistakes were ultimately harmless. During the ice archery competition, an athlete is so focused on his opponent's progress that he accidentally fires an ice arrow into the clouds, which causes one to turn into a giant spiked block of ice that falls towards the stands. The pegasi in the stands fly to hold it up, as do Celestia and Luna, but it still continues to fall. Shining Armor calls for unicorns to help, but because of an anti-magic field that unicorns passed through to prevent cheating, they can't help with their magic, and there isn't time to remove the spell. Spike, on instinct, leaps off of the backs of pegasi to unleash his fire breath on the ice block, melting it and preventing anypony from being hurt.

Even as the Mane Six and the Princesses praise Spike, he still feels down about himself, saying that anypony would have done the same thing if they had fire breath. Twilight finally realizes that the only person doubting Spike is Spike himself, and that he needs to be confident that he can succeed. To help him, Cadance offers to have Spike take her place to light the fireworks for the closing ceremony since he can't try the opening ceremony torch again. As the fireworks burst overhead, Spike reflects that when it comes time to show the world how great you are, you sometimes have to let go of the past to show how awesome you are in the present.

"Performance issues. It's not uncommon. One out of five..."