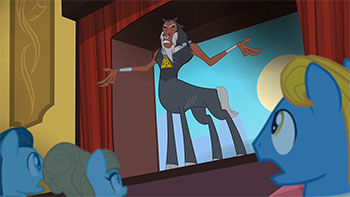 Guess who's back from the depths of the G1 verse? Think it's bad now? This is only the start!
"'Is he friend or is he foe?' the pony wonders. I can assure you — I am no friend. I am Lord Tirek!"
— Lord Tirek
Special Guest Star: John de Lancie as Discord
Written by Meghan McCarthy
Advertisement:

The episode begins with the group arriving in the Crystal Empire for Twilight's royal duties in helping to greet dignitaries of Maretonia. The job is pretty simple and hardly worth the trip, making Twilight feel she isn't doing enough as a princess. However Celestia, Luna and Cadance assure her she's just as important as they are and have the utmost confidence in her that she does has a true purpose and her time will come soon.

During all this, a mysterious cloaked being who calls himself Tirek drains the magic out of a unicorn, causing the pony's cutie mark to fade and empowering Tirek himself. Celestia and Luna see this in a vision, and they gather Cadance and Twilight, explaining Tirek's past. Long ago, he and his brother, Scorpan, came to Equestria from a far off land to steal its magic. However, Scorpan came to appreciate the ponies and befriended them. He tried to get Tirek to do the same, but when he refused, Scorpan alerted Luna and Celestia to his scheme. Tirek was stopped and imprisoned in Tartarus, while Scorpan returned to his own land. When Cerberus left his post, Tirek managed to escape. Twilight assumes that this will be her chance to contribute something by stopping Tirek, but Celestia corrects her, saying the one to stop Tirek is to be Discord.

Twilight returns to Ponyville and informs her friends, who are in disbelief of the decision, save Fluttershy. However, Twilight once more feels rejected and heads to the Castle of the Two Princesses to keep herself busy, with the rest of her friends tagging along to keep her company. As they near the castle, Discord meets up with them and somewhat rubs it in Twilight's face. However, he does bring up a point about the Tree of Harmony and the mysterious locked box and how it can help her prove herself as a princess before heading off to find Tirek. Seeing that he's right, Twilight and her friends head to the castle and see if they can find any books to help. When none come up, Twilight refers to the friendship journal which Discord has helpfully bookmarked.

Meanwhile, Discord confronts Tirek and easily captures him. However, Tirek appeals to Discord's former nature as the master of chaos, and offers to share Equestria when they take it over. Discord finds himself tempted by the offer. Back at the castle, Twilight realizes that all the trinkets they gained over the season could be the Keys they need, having been given to each of them by somepony whose life they changed for the better, after sticking with their element despite great temptation. They gather the objects and try to figure out how to activate them. It's only when Pinkie throws Boneless toward the chest in frustration does the rubber chicken suddenly turn into a key and fit into one of the slots. The others do the same, but Twilight's key is still missing and she hasn't received it yet.

Twilight is then summoned to Canterlot by Celestia to inform her of Discord's betrayal. With no one to stop him, Tirek has free rein to drain ponies across the land. Soon, he will come for their alicorn magic, and with it will be unstoppable. To prevent this, Celestia sees there is only one option: the princesses must give up their magic so Tirek can't take it!