Recap / My Little Pony: Friendship Is Magic S4 E20 "For Whom the Sweetie Bell Toils" 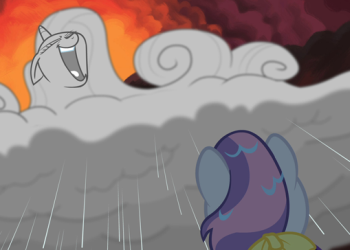 Sweetie Belle has written, directed, and is starring in the school play, but she needs Rarity's help with the costumes. Rarity is very busy working on a special order for Sapphire Shores, the Pony of Pop, but she makes the time to produce three stunning outfits for Sweetie Belle, Apple Bloom, and Scootaloo. The Cutie Mark Crusaders perform their play to lavish applause, but when they go out to mingle with the audience, they find that their sisters didn't make it because they were helping Rarity. On top of that, the only thing anypony remembers about the play is the costumes. Sweetie Belle returns to Carousel Boutique, full of anger, and accuses Rarity of making the dresses too good on purpose. Rarity says she only did what she thought her little sister wanted, but Sweetie Belle has none of it, storming out in a huff.

That night, Sweetie Belle is still angry and unable to sleep. While getting up for some water, she sees that Rarity left her door open. In her anger, she decides to sabotage Rarity's own work — namely, by removing a key stitch from the elaborate headdress which will be the centerpiece of Sapphire Shores's costume. Satisfied, Sweetie Belle goes back to her room and falls asleep, soon finding herself in a dream about accepting an award for her play. Even there, Rarity is able to ruin Sweetie Belle's happiness, raining and thundering at her until Princess Luna enters the dream to intervene.

Luna says that she understands what it is like to have a sister who sometimes outshines her. Within the dream, she takes Sweetie Belle back to a birthday party which she remembers as a time Rarity deliberately upstaged her. Sweetie Belle had put on her best outfit to impress her party guests, but they ignored her and paid all their attention to the party favors that Rarity made. One filly even said that they didn't need the birthday girl when they had the birthday's girl's "amazing older sister," which sent Sweetie Belle back to her room in tears. However, Luna rewinds the memory to reveal that there was another side to the story: the guests were so bored with waiting while Sweetie primped and preened that they had nearly walked out, forcing Rarity to break out the favors early to save the party. Further, she had told all of them that the party favors were Sweetie Belle's idea.

Luna then shows Sweetie Belle what had happened earlier that evening: Rarity was rechecking all of her work, second-guessing herself and becoming increasingly stressed, which Sweetie Belle admits she also does. Finally, Luna takes Sweetie Belle to what will happen if the sabotaged headdress is not fixed: Rarity is not only humiliated in front of Sapphire Shores, she becomes a laughing stock and a shut-in, obsessively rechecking everything and afraid to let anyone see her work. As she watches her sister descend into madness, Sweetie Belle can only beg for it to stop. When she finally wakes up, she rushes to Rarity's room to fix her mistake. But Rarity has already left for Canterlot!

With the other Cutie Mark Crusaders in tow, Sweetie Belle heads for Canterlot, making it to Sapphire Shores's dress rehearsal. Rarity is just about to show off the headdress when the Cutie Mark Crusaders enter through a window, grabbing the box the headdress is contained in and fleeing. Sweetie Belle manages to get out of sight just long enough to fix the stitching, with the unexpected help of the real Princess Luna. Rarity finally catches Sweetie Belle, who explains everything and apologizes to her sister.

Sapphire Shores is getting uneasy about the weird delays, but her concerns are instantly swept away when she sees the final piece, which has the image of a dolphin stitched on the front. Neither she nor Rarity can tell how Sweetie Belle knew her lucky animal, which swims with her in her dreams. (Luna, off to one side and out of sight, nods at Sweetie Belle.) Rarity then apologizes for being so caught up in her work that she missed Sweetie Belle's play, and asks for an encore performance. Sweetie Belle admits that the play wasn't that good, and the costumes were the best part.