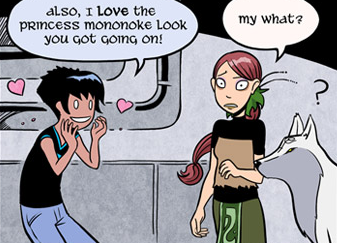 Soujirou: Oh, back then, Bisonnote (the boxer we Westerners call Balrog) was dressed up as Mike Tyson. Pretty cool.
Konata: Who's Mike Tyson?
[later that day]
Soujirou: Today, I felt the generation gap in a deep and very personal way.
— Lucky Star Manga vol. 6
Advertisement:

What was whose sled?

This is a subversion of Pop-Cultural Osmosis. When used in-universe, it's usually as a means of showing the difference between people from two different groups (usually generations) in which a character from Group A makes a pop culture reference (or mentions a famous person or movie or work) and one of four things happens:

This can happen because the person from Group B:

Note that A–F can go both ways (for example, someone too old to know Britney Spears or The Backstreet Boys may have fond memories of I Love Lucy or Herman's Hermits), and G is the natural conclusion of Pop-Cultural Osmosis, when even the Signature Scene is forgotten.

This, by the way, is the reason character-named tropes are often renamednote Mostly. Part of it is because people, apparently thinking more potholes automatically makes a better example, will all too often shoehorn in links to tropes that have absolutely nothing to do with the example in question, other than that the example includes that trope's namesake.. For example, if you're not familiar with original Sherlock Holmes tales, you won't know who Inspector Lestrade is; if not well-read in 19th-century French literature (or Broadway musicals), Inspector Javert may be unknown to you.

One of the many, many reasons for Not Self-Explanatory.

Contrast: It Was His Sled and especially Pop-Cultural Osmosis.

Everyone is appalled that Will misses several references to Marisa Tomei, including aggressively quoting "My Cousin Vinny" and listing off her other filmography.

Alternative Title(s): What Was Whose Sled

Everyone is appalled that Will misses several references to Marisa Tomei, including aggressively quoting "My Cousin Vinny" and listing off her other filmography.