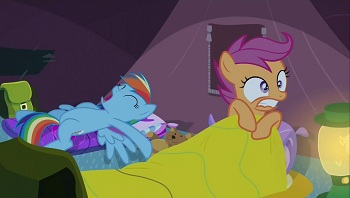 Could it just be the snoring?
Rainbow Dash: I've been told that these woods are haunted...by the Headless Horse! It gallops only at night—
Applejack: If it doesn't have a head, then how in tarnation does this pony know where it's goin'?
Rainbow Dash: It's headless, not brainless. ...Looking for little lost ponies—
Applejack: So where's its brain?
Written by Corey Powell
Advertisement:

Scootaloo is riding through Ponyville and catching air off an impromptu ramp when Rainbow Dash drops in and says she has "nice moves". Thus Scootaloo becomes obsessed with getting the pegasus mare to take her under her wing. Apple Bloom invites the two to come along on a weekend camping trip with her, Applejack, Sweetie Belle, and (with a little convincing) Rarity. The trip goes off without a hitch as Scootaloo does everything she can to impress Rainbow Dash—but she starts to fray around the edges that night when Rainbow Dash tells a scary campfire story about a spooky Olden Pony searching for her missing rusty horseshoe. Scootaloo puts on a brave face that earns her a compliment from Rainbow Dash for her "fearlessness" but can't get a wink of sleep after suffering a terrible nightmare about the Olden Pony.

The other ponies voice their concerns to the increasingly jumpy filly the next day, but Scootaloo plays it cool, unwilling to admit to her fears in front of Rainbow Dash. This coolness doesn't last long when she sees their next campsite: a deep, dark and spooky-looking cave. Scootaloo's nerves are further frayed when Rainbow Dash decides to tell another scary story, this time about the Headless Horse, who comes to haunt her dreams. Just as it corners Scootaloo, the Headless Horse is vaporized by Princess Luna, who's doing her nightly rounds around Equestria and monitoring the dreams of her subjects. Luna urges Scootaloo to confront her real fear—losing Rainbow Dash's approval—or the nightmares will never stop. With that, Scootaloo wakes up.

With her latest nightmare still fresh in her mind, Scootaloo zooms off into the forest, but she takes a bad fall and ends up in the river. She is washed downstream toward certain doom but is saved by Rainbow Dash, who admonishes her for wandering off in the middle of the night. Remembering Princess Luna's words, Scootaloo finally opens up about her fears and her desire to have Rainbow Dash as a big sister figure. Rainbow Dash then reveals a secret: those scary stories she told terrified her when she was younger. She agrees to take Scootaloo under her wing, and they rejoin the group for an enjoyable weekend. Later, Scootaloo finds herself confronting the creepy Olden Pony again, but this time dreams up Rainbow Dash, who produces the missing rusty horseshoe and sends the Olden Pony on her way. Scootaloo's nightmare turns into a happy dream, while Luna looks on with approval.