Recap / My Little Pony: Friendship Is Magic S1 E8 "Look Before You Sleep" 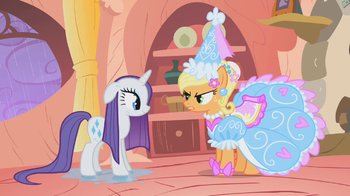 Thanks to a weather scheduling mix-up, there's a big thunderstorm coming to Ponyville, but Applejack and Rarity are distracted from their work preparing by arguing over whether to secure loose branches to the trees or just pull them down. They try to head home and cool their heels after the argument escalates, but the storm hits suddenly, forcing them to take shelter with Twilight Sparkle in Ponyville's library. Since Spike is out of town on "official business", Twilight decides to turn the event into a slumber party, despite Applejack and Rarity's reluctance to spend any more time with each other.

First up on the agenda (according to Twilight's book on slumber parties) is make-overs. Applejack is baffled as to why Rarity is reluctant to get her hooves dirty, but is willing to mess around with mud-masks, and thinks the "cucumbers over the eyes" thing is a waste of perfectly good food. Still, she goes along with it in order to make Twilight happy, despite rising tension with Rarity.

Advertisement:
Rarity: Fortunately, I can get along with anypony, no matter how rude she may be.
Applejack: Oh yeah? Well, I'm the get-alongingest pony you're ever gonna meet!
Rarity: That's not even a word.

Next up is ghost stories, and when Applejack and Rarity use it as an excuse to snipe at one another (with Applejack's "terrifying tale of the prissy ghost" and Rarity's "horrifying story of the messy, inconsiderate ghost"), Twilight decides to show them how it's done by regaling them with "The Legend of the Headless Horse".

S'mores are up next, but Rarity's perfectionism once again clashes with the more laid-back Applejack. The two take the next event, "truth or dare", as an excuse to dare each other to do things they hate, with Rarity being dared to stand in the rain and let her mane get all wet, and Applejack being dared to put on a frilly party dress. After Twilight is literally caught in the crossfire of a nasty pillow fight, she gives up and convinces the two to call it a night.

Unfortunately, Applejack and Rarity are forced to share a bed, and are so tense they even have to fight over the blanket and whether or not one should make the bed before sleeping in it. Twilight finally decides she's had enough, especially when the two argue over who's been trying harder to get along.

Twilight: I hope you're happy, both of you! You've ruined my very first slumber party! The makeover, the s'mores, truth or dare, the pillow fight... I mean, is there anything else that could possibly go wrong?!

Turns out there is, as lightning strikes the top of a nearby tree, threatening to bring it down on a neighboring house. Applejack is quick to try and pull it away, but her reckless roping brings it crashing through the window of Twilight's tree house instead! With the storm outside worsening and a neurotic (and likely concussed) Twilight freaking out over whether or not a tree coming through the window fits into the slumber party itinerary, Applejack and Rarity are forced to set aside their differences in order to shift the fallen tree. Once the crisis is averted, Twilight is pleased to see her friends getting along again, and the three get down to genuinely enjoying the night together.

As morning comes, Twilight prepares to report to Celestia that she's learned how two ponies who seem to have nothing in common can still be good friends... then tries to convince her friends to try another slumber party sometime.

Spike is in Canterlot

Twilight mentions Spike is not in this episode because he's away in Canterlot on "royal business".

Spike is in Canterlot

Twilight mentions Spike is not in this episode because he's away in Canterlot on "royal business".