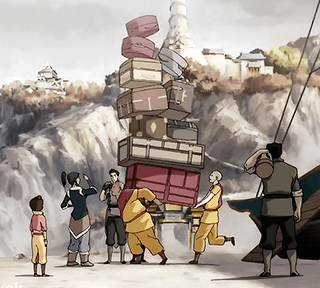 There's gotta be a kitchen sink in there, somewhere!
Lone Starr: Checking in? What the hell is that?
Barf: [voice muffled with a suitcase strap] Her Royal Highness's matched luggage!
— Spaceballs
Advertisement:

A character has a very loose grasp on the idea of "necessities", bringing along towering mountains of suitcases filled with a year's supply of clothes and other frippery they probably don't even need at home. Two waffle irons, for example, so that there is a choice of waffle-dimple patterns. This, for a weekend trip. Special points awarded if the trip is a camping trip, where the idea is to get back to nature.

Often leads to Human Pack Mule and Fancy Camping. Compare City Mouse. May also be a flaw of the Alpha Bitch. Can overlap with Rich in Dollars, Poor in Sense if the character is wealthy.

We then see Simon, Theodore, and Dave struggle to move another, even larger luggage cart, bearing even more trunks and cases belonging to Brittany. Brittany herself even lampshades this later when the lodging accommodations are less than commodious for the kids, and she remarks, "It's a good thing I packed light!"

Peach's luggage proves too much for the Toads.

Peach's luggage proves too much for the Toads.