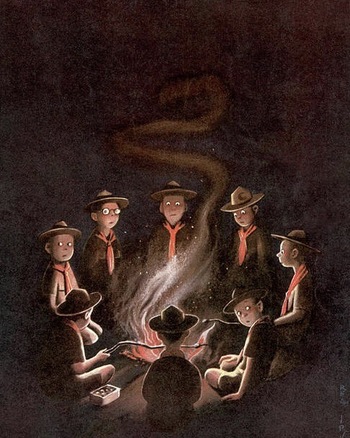 Ah, the classic: everybody's gathered around a campfire, telling spooky stories just in order to see who can freak the others out the most. Usually, in fiction, the stories will be made up on the spot and may even have to do with the location the campers are staying in; when this happens, it often turns into a ghost hunt, after someone's fevered imagination takes the story a little too seriously. Whether or not the location actually is haunted varies, but even in cases where there's a rational explanation for the strange occurrences the campers experience, it's common to leave the story with a somewhat jokey Maybe Magic, Maybe Mundane ending.

A common variation is for a parent — who may also be a Nightmare Fuel Station Attendant, or perhaps simply has no sense of what would be Harmful to Minors — to tell their children a story like this right before bedtime, leading either to nightmares on the kids' part, or overactive imaginations leading to a hunt for the ghosts like in the main version. In other cases a parent may employ such a story to scare a misbehaving child into behaving.

See Ghostly Goals for the frequent motivations of the ghosts in the stories and Our Ghosts Are Different for the various ghost story-writing conventions.

Probably the ur-source for the Horror genre and a lot of Urban Legends. For that reason, most actual literature that is this genre should probably go on one of those pages, rather than this one, which will restrict its examples to usage as a plot device.

Note that this doesn't have to take place on a camping trip, and the story itself needn't actually involve ghosts. Any fiction that has the characters trying to scare each other with stories in-universe counts.

Not to be confused with book 13 of The Dresden Files, the Peter Straub novel or its film adaptation, the Coldplay album, or the anime called Ghost Stories. Super-trope to Scarily Specific Story.

In certain camps, the hero tells a scary ghost story to their teammates.

In certain camps, the hero tells a scary ghost story to their teammates.