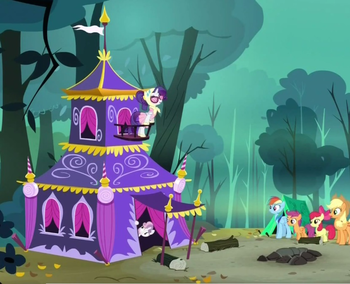 This is roughing it?
What it was, to be honest with you, was a campground. It was one of those modern ones with swimming pools and miniature golf and video games, the kind that's popular with people whose idea of getting close to nature is to turn the air conditioning in their recreational vehicles down to medium.
— Dave Barry, "Valuable Scam Offer"
Advertisement:

Oh, look. It's Alice Sue spending her day in that very fancy (and pretty expensive looking) place wearing nice clothes and sipping on what looks like an espresso or a martini. She looks like she's living the life.

But there's just one thing... Alice is spending the day with her friends camping in the woods; where everyone else is sleeping in regular tents, fishing at the lake and roasting marshmallows.

Often called "glamping", this is usually done by the City Mouse or just about anyone who couldn't bear at the mere thought of, "roughing it." The things this person brings with them can range from televisions and refrigerators to even a whole house or mansion. Everyone else who sees this (especially if one of them has experience in living in the woods) will surely point out that that person is Comically Missing the Point.

Obviously a comedy trope. Often coincides with Lots of Luggage (how else are they going to get all that stuff there?) and Horrible Camping Trip.