Recap / My Little Pony: Friendship Is Magic S1 E26 "The Best Night Ever" 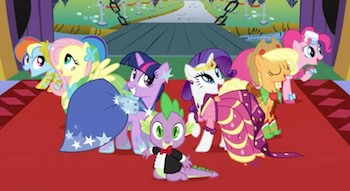 The night of the Grand Galloping Gala has finally arrived! Everyone's excited about it being "the best night ever", and hopes for each of their dreams to come true. To recap: Fluttershy wants to befriend the creatures in the gardens surrounding the palaces, Applejack wants to sell apple-based treats to raise money for the family farm, Rarity wants to meet her Prince Charming, Rainbow Dash wants to meet (and hopefully join) the Wonderbolts, and Pinkie Pie wants to live it up at the biggest party in Equestria. Also, we find out that Twilight Sparkle wants to simply chat with Princess Celestia, while Spike hopes to hang out with his friends and show them around Canterlot. As soon as the group arrives at the palace, though, all except Spike run off to set their plans into motion, leaving him all alone...

At first, things seem to be going all right, and at least somewhat according to what the girls envisioned. However, things quickly go wrong. The party-goers don't appreciate Pinkie's enthusiastic nature; Twilight can't get a chance to really have a conversation with the Princess as the two of them have to greet every single guest; Rarity's object of affection, Prince Blueblood, acts like a complete Jerkass towards her; all the animals in the garden run away from Fluttershy, who grows more and more impatient as they do so; Rainbow Dash gets to hang out with the VIP crowd thanks to the Wonderbolts recognizing her, but can't get a moment to talk to them and Applejack ends up making only two sales after about an hour at the Gala - one of which was to Rarity. Determined, however, the ponies pledge to make it the "best night ever".

Things quickly get out of hoof, though. When the party goers reject Pinkie's peppy singing and dancing because it isn't "that kind of party", she assumes that they want her to get even more aggressive and rowdy. Applejack realizes that no one's been buying her wares because fancier hors d'oeuvres are available, so she whips up something more sophisticated. Fluttershy, meanwhile, is physically chasing all the animals around the castle grounds, growing steadily more unhinged as she does so. The whole disaster reaches its boiling point when Applejack carts a huge cake into the ballroom just as Pinkie does a stage dive into the crowd. Pinkie lands onto the cart, knocking the cake into the air. Prince Blueblood uses Rarity as a shield against the cake, whereupon she thoroughly chews him out for his horrible behavior all night. Cornered, the Prince knocks over a statue, which Rainbow Dash quickly catches, only to knock down several columns in the processnote Alas, despite her efforts, the statue also breaks into several pieces. As the dust settles, Princess Celestia and Twilight arrive on the scene, and just when Twilight thinks it can't get any worse, a stampede of wild animals being pursued by a furiously insane(!) Fluttershy rushes in, causing everyone to panic. The Princess tells Twilight to run, and she does so, her friends following behind. On the way down the stairs, Rarity drops one of her glass slippers. After Pinkie tells her that her prince would surely use it to find her, the horrified Rarity backtracks and smashes the slipper to pieces before fleeing in terror.

The girls meet up with Spike, who's been drowning his sorrows in fried pastry and sprinkles at a local doughnut shop. They all relate what went wrong with their night over a plate of doughnuts, and agree that it was the worst night ever. Just then, Celestia arrives in the shop, thanking the ponies for making it the best Gala ever. Turns out the Gala's always a boring, horrible event, and Celestia invited the six in hopes that they would liven things up a bit, although the chaos that followed wasn't exactly what she had in mind. The episode ends with Twilight realizing that friends can make even the worst situations seem that much better.