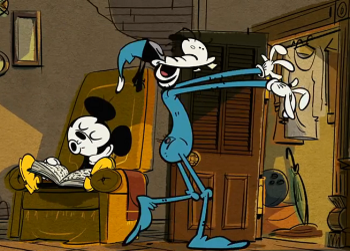 Somnambulism, commonly known as sleepwalking, is the phenomenon where a person, while sleeping, performs physical activities, often with their eyes open but unresponsive to the world. Within the real world, the sleepwalker will typically have their eyes open and will move as normal, if sometimes a bit slower as if tired. Any complex action that is performed while awake may be replicated while sleepwalking, including unlocking of doors, catching trains, driving cars, even sex and murder.

The sleepwalker typically avoids obstacles, but still may be injured by non-routine events such as tripping hazards or closed doors. The disorder is common in children, but is typically grown out of. It is rarer in adults and consistent bouts of sleepwalking may indicate various psychological or brain disorders. Because sleepwalking typically occurs outside of REM sleep, dreams very seldom correlate with the actions while sleepwalking.

In fiction, sleepwalking is generally portrayed with the sleepwalker having both arms extended in front of them, eyes closed (and in some extreme cases, blindfolded), and possibly even snoring. The sleepwalker will again perform complex actions, but will almost always have an uncanny ability to avoid dangers in their world that they really shouldn't be aware of.

Folklore regarding sleepwalking states that waking a sleepwalker is dangerous, but in reality, the worst that may happen is confusion as they awake in a strange place.

See also Talking in Your Sleep, a related phenomenon, and Escort Mission or Badly Battered Babysitter for the frequent trope involving other characters trying to shepherd the sleepwalking character past danger without waking them due to the old wives' tale.