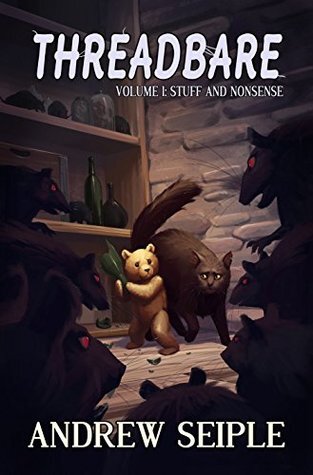 "Once upon a time, there was a teddy bear. An old man bent with tragedy, but still daring to dream, made him into a thing that could think and feel."
Advertisement:

Threadbare came into the world as a failed experiment. A toy golem, but not powerful and intelligent like his creator Caradon wanted. Before he could be recycled for resources, however, the little girl Cecilia assumes he is a present and adopts him as her own. Caradon sees no harm in it, and allows her to take him.

But Threadbare is in fact a success. Not a genius, not a super-golem, but a golem that can learn and grow.

Unfortunately, Cecilia's life is more complicated than either she or Threadbare realizes. Conspiracies surround her, the king and his daemon servants are hunting her, and her mere existence could start or end wars. As she grows older, she begins to understand that she will have to mature, to put aside her childish things and do what is necessary.

The Threadbare books are a LitRPG outing by Andrew Seiple, started in Fall 2017, and then released to online stores. His Small Medium series is set in the same world but following a different protagonist in a different part of the world. The prequel series Blasphemy Online explores more of the "real world" and how Generica Online got to where it is now.

The conceit of the setting is that the world used to operate on classic D&D paper-and-pencil RPG rules, but now operates on something closer to a MMORPG with skills leveled up by use, and classes unlocked by performing specific tasks.

The books consist of:

Set some forty years after "the change" that gave people jobs instead of THAC0, Threadbare finds himself thrust into the heart of the rebellion against King Melos.

Set three years after The War, Threadbare learns that politics can be even more deadly than dungeons or dragons.