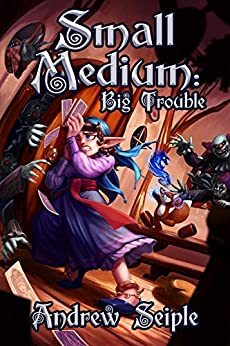 The Small Medium series is a trilogy of LitRPG books by Andrew Seiple, set in the same Generica Online setting as his Threadbare trilogy, where a few decades ago, the world transitioned to MMORPG mechanics where statistics and skills are visible and able to be improved by discovery and repetition.

Chase Barrymore is a female Halven, a race whose members are short, stout, and generally averse to trouble of any kind. Chase despairs of the boredom of life in the village, and yearns for excitement, which inevitably finds her again and again as she begins to unravel the mystery of the seemingly immortal Playas, as well as her role as an Oracle to Hoon, god of travel and trade.