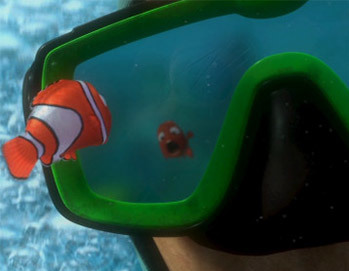 Iä! Ph'nglui mglw'nafh Scu'ba Di'ver Syd'ney wgah'nagl fhtagn!note In his house at Sydney, dead Scuba Diver waits dreaming.
Grandpa Squirrel: Well, they were like monsters. They wore great big iron pots on their heads, they walked on their hind legs, and they carried terrible-lookin' shootin' irons with knives on the end of 'em, and their eyes flashed, and they had tremendous big snouts that curled down and fastened on to their stomachs!
Baby Squirrel: Ooooh! Grandpa, I'm glad there ain't no more men around!
— Peace on Earth
Advertisement:

Humanity isn't always on the apparently low end of the cosmic totem pole. If a story takes the point of view of animals or relatively weaker or more primitive non-humans, there'll be a Perspective Flip related to Clarke's Third Law where technologically-advanced, or, more rarely, magic-using humans shall be seen as unnaturally and nauseatingly inconceivable.

The non-human creatures will usually consider Man as Always Chaotic Evil, and treat it either with wary respect or an odd reverence as a divinity. Whether it's born from survival instinct or cultural baggage, most will be reluctant at best to actively resist Man's activities, let alone be curious to know them, lest one would suffer in the most merciless manner at the hands of Man's Industrialized Evil. Possibly the non-human society realizes that committing to major action against Man would risk breaking the Masquerade, crossing some sort of Moral Event Horizon, or is just plain suicidal.

To meet this trope, the non-humans must consider either individual (completely normal) humans or Man's civilization as a whole to be:

One exception to this treatment happens when some non-humans, usually children, become pals with a human, again usually another child. The contact is treated as an exception rather than a rule, in that this one human is different and kind, while still considering revealing themselves to Man as a whole as endangering themselves. The non-humans who engage in this contact may or may not have their society's sanction to do so — it may be verboten and seen as risky, or alternately a useful tradition where they selectively reveal themselves to worthy humans. There are advantages to getting on a god's good side, after all.

The non-human society may be a Cargo Cult, primitive fantasy creatures or Insufficiently Advanced Aliens, a Mouse World, robots, or a Hidden Elf Village separated from human civilization. They may only consider humans to be things of myth, and be terrified to find out otherwise. In cases where humanity is long extinct, they may be perceived as mysterious, eldritch or Abusive Precursors, who walked the world long ago and left it filled with strange ruins and bizarre artifacts.

See also Humans Through Alien Eyes and Humans Are the Real Monsters. In a way we are The Fair Folk and/or the Uncanny Valley to others in this trope.

Often results in Nightmare Fuel or a God Guise. May be a case of Obliviously Evil. Has surprisingly little to do with Humanoid Abomination, although the non humans may perceive us as this. Contrast Transhuman Abomination, where a human becomes Cthulhu so far as other humans are concerned.