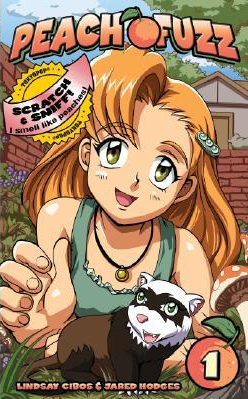 . It was recognized as a grand-prized winner of Tokyopop's "Rising Stars of Manga" competition in 2004.
Advertisement:

A young girl named Amanda Keller is determined to get herself a ferret as a pet, an animal she adores because it's cute, fuzzy, and exotic (as opposed to cats, dogs, birds, fish, and other "common" house pets). After a short disagreement with her mother, she is eventually allowed to go to the pet shop and purchase the ferret, which she names "Peach".

Peach is the imaginative and irritable type, and tends to bite its new owner whenever she moves in to be petted. She perceives the human world as some sort of medieval fantasy, and Amanda's hand as a "handra" out to cause her harm. This causes all sorts of problems for the duo in the real world. Throughout the story, Amanda tries to learn how to take care of her pet and get it to warm up to her before her mother takes it back to the pet shop in exchange for a "less dangerous" animal.