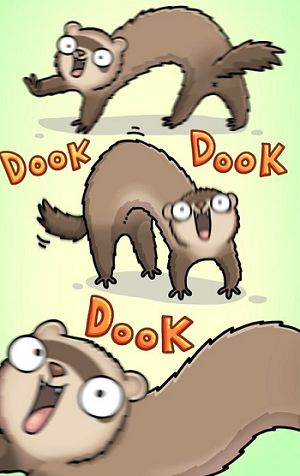 by SiberianLizard.
"A Furret has a very slim build. When under attack, it can squirm through narrow spaces and get away. In spite of its short limbs, it is very nimble and fleet."
— Pokédex, Pokémon Emerald
Advertisement:

Ferrets in fiction are generally energetic characters. Being really hyperactive, they're depicted as Genki Girls or Keets with boundless amounts of energy. This often also means they have short attention spans, or in the case of Talking Animals, they might be a Motor Mouth.

This is Truth in Television. Ferrets are very lively and curious pets, even more-so than cats. They're prone to doing a "weasel war dance" when particularly excited. Some ferret owners even struggle to keep up with their ferrets because they're too energetic for them! Of course, however, this hyperactivity decreases as they get older, and they might not be as playful at ages 5-6 as they were when they were kits.