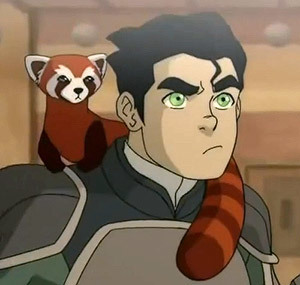 The popularity of ferrets has created a new kind of animal sidekick character, in addition to the old standbys of the loyal, dull Dog and the smart, snarky Cat.

The weasel (or ferret) is a cute, mischievous, playful mascot who nonetheless looks out mainly for himself and can be very critical of people around him. He's nowhere near as clever as he thinks he is, and swears up and down he doesn't have to be fussed over. Until he wants to be, and frankly he's not about to turn down free food or attention if it's offered. If the dog is the fighter class, and the cat is the mage, then the weasel is the thief.

Animal mascot personalities normally fall into the Cat or Dog stereotypes even if the author has tried to use a more exotic animal, like a bird or mouse — it'll still act like a Cat or a Dog. The Weasel Mascot personality, likewise, may apply to other mustelids — but weasels, otters, and ferrets are most common. The Weasel personality is rarely applied to badgers and wolverines however (the latter in case where Bears Are Bad News). Mongooses, despite being unrelated to weasels (they're actually closer to cats, of all things), are also prone to this sort of portrayal.

A major benefit of the Weasel personality is that it largely reflects the behavior of the real animal. The Weasel can make a good ironic deadpan snarker, without the nasty or untrustworthy streak commonly associated with the Cat, or the aggressive, scavenging nature of the Dog. There is deep irony in the contrast between the two because weasels fared differently in older Western works, although this trope's ancestor can trace back to the weasels' fictional enmity against mythical Basilisks in European legends.