Western Animation / The Flight Before Christmas 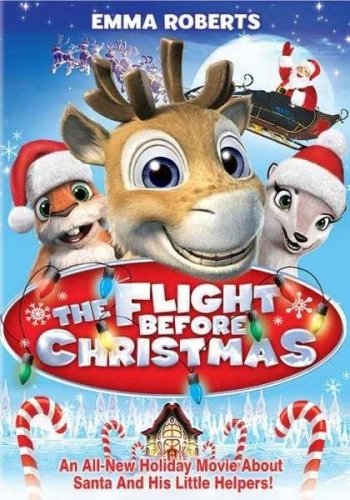 The Flight Before Christmas is a Finnish-Danish-Irish-German computer animated feature film first released in 2008. The film was written by Finnish screenwriter Hannu Tuomainen and directed by Kari Juusonen from Finland and Michael Hegner from Denmark.

The film is a holiday movie about a young boy reindeer named Niko, who believes his father (whom he doesn't know) is one of Santa Claus's flying reindeer. Niko lives in the wilderness of Northern Finland with his single mother Oona and his adult friend/surrogate father Julius the flying squirrel. Niko wants to become just likes his father and tries to learn how to fly, much to the scorn of other reindeer in his herd.

One day, returning from his flying practice, Niko unknowingly leads a pack of wolves to the herd, forcing them to flee from their safe Home Valley to the snowy tundra, where the food is scarce. Niko is blamed for what has happened and he runs away from home to find his real father from Santa's headquarters in the North Pole. He is accompanied by Julius, who wants to protect Niko as he is the only person he cares about, and Wilma, a musical weasel the two meet on their journey. After an eventful journey, the three of them arrive at the North Pole, where Niko will finally find out if his dreams of his father come true or not. Meanwhile, Black Wolf and his wolf pack (unwillingly aided by Essie, a naive, pampered poodle who got separated from her vacationing owners) are also looking for Santa's workshop, for their own sinister reasons...

The film was released theatrically in several European countries, but in the US it was released Direct to Video and broadcast on TV by CBS around the holiday season. In subsequent rebroadcasts, the 46 minute CBS edit tends to be shown after prime time, perhaps to avoid this confusion (although it was shown during prime time in 2013 and 2014).

A sequel, entitled Little Brother, Big Trouble: A Christmas Adventure, was released in 2012. The plot involves Niko's mother finding a new mate, and Niko getting a new step-brother, to his dismay.