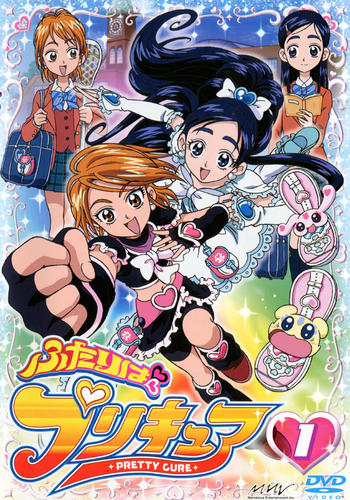 Futari wa Pretty Cure ("The Two of Us Are Pretty Cure"), shortened to just Pretty Cure and nicknamed PreCure, is an Anime First Magical Girl show done with a modern, self-aware approach to an old genre, as well as the first series in what would become the Pretty Cure franchise.

Nagisa Misumi and Honoka Yukishiro are two eighth-grade girls who normally would have never become anything more than passing acquaintances. Nagisa is an energetic jock and ace of the lacrosse team, loved by all the girls but secretly wishing for a male admirer straight from a romance novel. Honoka is the star pupil and class president, incredibly popular with all the guys but not too fussed about acting upon it.

That was until the day Nagisa made a wish on a shooting star and (violently) came into contact with Mepple, a fairy on the run from the sinister agents of the Dusk Zone. Fleeing from the Dusk Zone's monsters, Nagisa runs into Honoka, who happens to have Mepple's partner (and lover) Mipple. To defend themselves, Nagisa and Honoka use the fairies' power to transform together into Cure Black and Cure White: the Emissaries Of Light, Pretty Cure.

Pretty Cure was aimed at both young girls and young male adults, and the amount of Postmodernism awareness of the Magical Girl genre and Parental Bonuses shows it. Nagisa in particular is flabbergasted by the silly clichés of the genre, reciting a prolonged post-transformation catchphrase and then blurting out, "Wait, what am I saying?!"

Pretty Cure bucks the formula in other ways. The girls are very physical when fighting: leaping, punching and kicking their foes and reserving magical attacks for the final blow. Both girls possess super-strength and agility, making them far more formidable in hand-to-hand combat than the usual magical girl. It's worth noting at this point that the director of Pretty Cure was Daisuke Nishio, whose resume also includes Dragon Ball Z.

All their magical abilities come from teamwork: they have no solo attacks and cannot even transform into their Pretty Cure forms unless they do so in unison. The show focuses heavily on the developing friendship between Nagisa and Honoka, even throwing in some blatant yuri subtext for the older audience. From an animation standpoint, the show seemed to have an aversion to Stock Footage: if Nagisa and Honoka were in different clothes when they transformed, a new transformation sequence would be animated. All of this makes for one of the more unique Magical Girl shows to come along in a long time.

The show proved so popular that a direct sequel, Futari wa Pretty Cure MaX Heart, followed immediately afterwards. Following the finale of Futari wa, the Queen of Light is forced to shatter her own essence and scatter the pieces to Earth. Nagisa and Honoka are recruited once more by the Garden of Light, given upgraded powers and tasked with finding the twelve "Heartiels" that make up the Queen's heart. Aiding them is a Mysterious Waif called Hikari who transforms into Third Ranger Shiny Luminous, and avoids the usual problem with new members by acting as more of a Support Party Member to Black and White. Opposing them are the remnants of the Dusk Zone, who are seeking a way to revive the Dark King.

4Kids Entertainment originally had the US license (in the same package deal rumored to also give them One Piece and Magical DoReMi), but they dropped the license before they did anything with it for unknown reasons (possibly due to the failures of DoReMi and Mew Mew Power). YTV then signed a deal with Toei to air the show in Canada in 2009 where the English dub (produced by Toei/YTV and Ocean Studios) debuted. Additionally, it has aired in this form in Australia and New Zealand on Cartoon Network; and in the UK on PopGirl. And if you live in America, you can legally watch the subtitled version from Toei right here,

The original duo would later make their return in HUGtto! PreCure as guest characters to celebrate the franchise's 15th anniversary as well as to promote the the All-Stars Memories Crossover movie.

Compare to My-HiME and its successor, My-Otome.