Manga / The Three-Eyed One 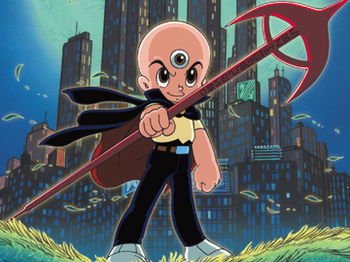 Mitsume ga Tōru, or The Three-Eyed One, is a manga series created by Osamu Tezuka, about a gentle little bald boy called Hosuke Sharaku who happens to have a third eye hidden under a bandage, which, when revealed, brings him to a Superpowered Evil Side. Thus, he is both the hero and the villain in his own series. He is followed around by an older girl, Chiyoko Watou, who tries to keep him in check.

Together, they investigate strange events and mysteries and will usually have to take off his bandage so he can use his high intelligence to find a solution. Of course, becoming also evil, the other characters will also have to struggle into putting the bandage back.

Sharaku is a regular of Tezuka's Star System and him and Watou often appear in other works by Tezuka, including the later Black Jack anime series (where Watou is his big sister). He usually keeps his bandage in those appearances. When without his bandage, he is a villain, such as in the video game Astro Boy: Omega Factor where he is the Evil Overlord of the Mu empire.