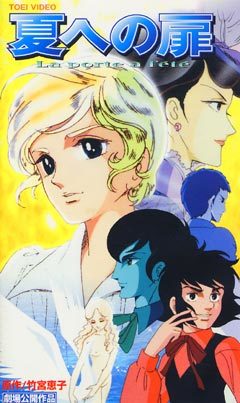 "Let's go back! Let's go back to the way we were! Back to the beginning of summer...!"
"The boys were no longer children. But even when they spoke about greater things, they weren't adults yet."
Advertisement:

In the France of the late 19th century, Marion Fiese is a young schoolboy who prides himself on his adherence to a philosophy he calls "rationalism". Because of his disdain for emotional display, he ignores anything remotely akin to affection. But when he's entangled in a romantic affair with an older courtesan, Sara, his rationalism is revealed to be little more than a cover for his own emotional immaturity. Learning to love, Marion blossoms under his older lover's care but unfortunately, Marion has yet to learn the true price of the affair. At the same time, Marion's friends (Jacques, Lind and Claude) and Ledania, the prettiest girl in town, have their own love problems...

Natsu e no Tobira (夏への扉, "A Door Into Summer") is a short manga by Keiko Takemiya. The original manga is a short story, which first appeared in 19th and 20th issues of magazine Hana to Yume in October, 1975. It was later contained in the anthology book of Keiko Takemiya, published in 1976.

This title has nothing to do with the novel The Door into Summer by Robert A. Heinlein, or the Digimon Adventure 02 CD Drama Natsu e no tobira.

Some of the tropes in Natsu e no Tobira are...