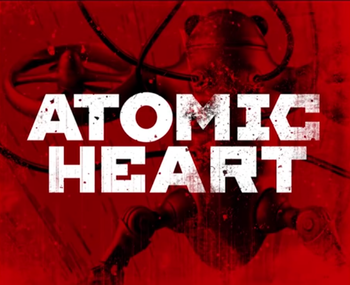 Atomic Heart is an upcoming Immersive Sim game, currently being developed by the Russian studio Mundfish, and slated for PC, PlayStation 4, PlayStation 5, Xbox One and Xbox Series X|S.
Advertisement:

It is set in an alternate timeline where USSR was able to make a great leap in robotics and genetic engineering after the war. However, it's all Gone Horribly Wrong, and now you need to unravel the aftermath, starting from the research centre where it all went down.

, while the trailers are here

. The game also supports raytracing, and was featured

in the NVidia tech demo presentation.

Tropes present in the Atomic Heart: