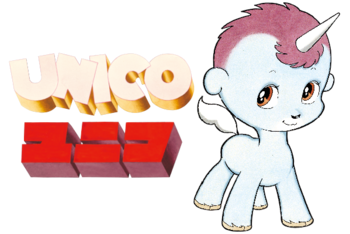 The adorable foal himself!
"Love is a song eternally repeated.
All living creatures sing the song of love.
Like a wave breaking on the seashore,
love is always coming, and always passing away..."
Advertisement:

Unico (ユニコ, Yuniko) is a children's series of manga and anime films based on the character of Unico, a baby unicorn who was born with the very special gift of making all living creatures lighthearted and happy, though in the original manga, he could only use his powers for someone who shows him unconditional kindness. However, the gods are jealous of Unico's powers and send the West Wind to banish him to oblivion. Taking pity on Unico, the West Wind instead transports Unico to various faraway places across time and space, and whenever the gods learn of his whereabouts she takes him away to another land...but Unico rarely ever gets to say goodbye to the friends he has made, and his memories are taken away each time he goes somewhere new. Developed by Osamu Tezuka, the manga first ran in Lyrica, a Sanrio publication for children, and eventually consisted of two volumes running from November 1976 to March 1979.

An anime pilot called Unico Black Cloud and White Feather from 1979 was created but rejected, and two films and a short were completed afterward (in 1981 and 1983 respectively for the films). The movies, both co-produced by Sanrio and Tezuka Productions with animation by Madhouse, are The Fantastic Adventures of Unico (1981) and Unico in the Island of Magic (1983), later accompanied by the short Saving Our Fragile Earth: Unico Special Chapter (2000), a Chinese co-production.

The story covered the adventures of Unico the unicorn who found himself facing issues such as environmental impact, friendship and teamwork.

On November 2015, Tezuka Productions launched an official Unico fanclub known as "UNICOclub" dedicated to any Unico related news and merchandise in Japan.

On May 1st, 2022, Octas Inc. launched a Kickstarter campaign announcing an upcoming remake of the manga titled Unico: Awakening which will be an entire reimagining of Unico

for the next generation of readers. The artwork and character designs will be handled by Gurihiru with Samuel Sattin as the main writer. The creators are also working closely with Tezuka Productions to keep as faithful to the original manga and character as possible with an English and Japanese release. The kickstarter

immediately reached it's goal by fans from both Japan and the western market when it was barely 24 hours old.

The manga is currently scheduled for a June 2023 release, just in time for the 40th Anniversary of the original Japanese release of Unico in the Island of Magic.

The Unico franchise provides examples of the following tropes: