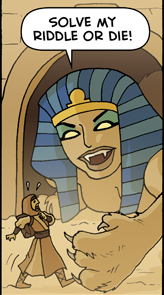 It's a f**ing book, okay?
"Ha ha! Hey Sphinxie, I got yer riddle right here: What's hard in the morning, soft most of the day, and hard again all night?"
"I don't know, but I think you've got one in your pocketses!"
— The Order of the Stick
Advertisement:

In Classical Mythology, Oedipus encountered a Sphinx and was, famously, forced to solve the Riddle of the Sphinx in order to pass. Ever since, it's been a tradition that all sphinxes ask riddles. So if you see a sphinx, be prepared for a game of Riddle Me This.

The classic Riddle of the Sphinx still appears occasionally, but most sphinxes will come up with their own new ones, since, let's be honest here, everyone knows the answer to the original.

Exactly why sphinxes are driven to do this varies from work to work. Sometimes sphinxes will be depicted as enjoying mental challenges and games of wits, sometimes they'll have mental compulsions driving them to engage others in this manner, and sometimes they'll simply ask riddles without any specific explanation provided for why they do this.

Subtrope of Riddle Me This and Our Sphinxes Are Different. Related to Only Smart People May Pass.