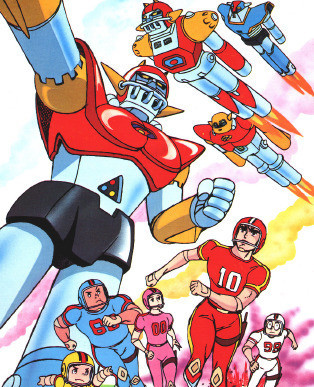 The story begins with Takeshi, a teen ward of the Blue Sky orphanage who recently started an American football team with his friends. On the day before his sixteenth birthday, the caretaker produces a letter that was with Takeshi when he arrived. It tells Takeshi that the author would be returning for him when he turned sixteen, and the news sends him running away in fear.

Takeshi arrives at the football field, pursued by his friends, when a giant green crystal falls from the sky and stabs him in the chest. It emits a blinding light that knocks everyone out, whereupon a UFO appears and beams them aboard. When he wakes up, Takeshi is greeted by Rabi, a royal advisor from the planet Apolon. Rabi reveals to Takeshi that he is the last prince of Apolon, spirited away to Earth to avoid death at the hands of General Dazaan. As a member of the royal family, Takeshi can use the "Key Energy" crystal in his chest to control Dai Apolon, the world's guardian robot.

The series proceeds from there, following Takeshi and his friends as they use the robots to defend Earth against the Dazaan army, retrieve the stolen Energy Heart, and avenge the death of his father. Takeshi controls Dai Apolon, which is formed by combining three separate super robots, while his friends operate various UFOs to provide support and cover fire. As Dai Apolon, Takeshi can use his Key Energy powers to grow and merge with the mecha, "wearing" it like cybernetic armor.

Dubbed versions were broadcast in parts of Europe. Five episodes were combined and dubbed in English to create a Compilation Movie called Shadow World.