Anime / The Fantastic Adventures of Unico 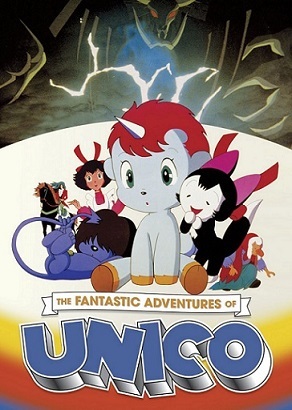 "The little fellow named Unico, as cute as cute can be."
"An innocent boy was Unico so happy and so care free."
"With heaven, life as sweet as nature could have planned."
"What strange gift do you hold in your hand?"
"Is it true? That where ever you may go?"
"Oh Unico."
"Across the land the fighting will cease, and night will turn to day."
"All tears will simply disappear, and the world will say."
"We love you, Oh Unico."
"We love you."
— First song from the movie introducing the viewers to Unico.
Advertisement:

The Fantastic Adventures of Unico is a 1981 animated feature film based on the Unico manga by Osamu Tezuka. The film was produced by Sanrio and Tezuka Productions with animation by Madhouse.

The film begins with the birth of Unico; a baby unicorn with the very special gift of making all living creatures lighthearted and happy. But the gods become jealous of Unico's ability and task the West Wind with banishing him to oblivion. However, the West Wind takes pity on Unico and instead swears to keep him safe from the gods' wrath. She tries to hide him anywhere she can, moving him to a different place every time the gods get too close to finding him again. Thus begin Unico's adventures, helping the people he meets on his travels and doing whatever he can for them before the West Wind returns to spirit him away once more.

The film was dubbed into English and frequently shown on the Disney Channel during The '80s. It's now available in a bilingual DVD release from Discotek Media, the first time the original Japanese version has been commercially available in the U.S.

The Fantastic Adventures of Unico provides examples of the following tropes: