Anime / Fang of the Sun Dougram 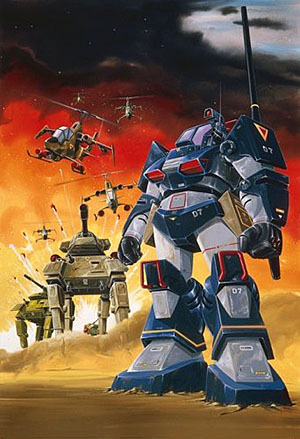 A Soldier of Light steps forward to challenge the Hawks in the Shadows.
"Not even justice, I want to get truth!"
Advertisement:

In Space Century (SC) 152, the planet Deloyer, Earth's only colony, is home to a growing independence movement. The Fang of the Sun are a small team of guerillas fighting against Earth's occupation. To counter Earth's Combat Armors, they have a lone Combat Armor of their own: Dougram, a CA specially built for Deloyer's environment — and piloted by Crinn Cashim, the rebellious son of the leader of the Earth government on Deloyer.

Fang of the Sun Dougram is a 75-episode anime series by Sunrise that aired from October 23, 1981 to March 25, 1983, directed by Ryousuke Takahashi. The show was part of the first flourishing of Real Robot stories. A considerable chunk of Dougram's DNA comes from Mobile Suit Gundam, which several of the staff, notably the mechanical designer and the scriptwriter, also worked on.

Dougram is noted for its ground-level approach to action: Combat Armors are powerful, but infantry and air support play an important part in most of the battles. (Dougram itself has to be hauled to the battlefield on a flatbed truck.) The series also has a fairly involved political landscape. Several members of the Earth Federation lend some support to the rebels, while the occupying forces themselves are divided between hardline and moderate officers.

The story's tone is cynical but not extremely so. War is terrifying and ugly, but not without moments of happiness and comedy. The Federation's rule is oppressive, but there are sympathetic Federation characters. Death is permanent, and usually random and futile — but on the other hand named characters die at a surprisingly slow rate. And, unlike Mobile Suit Gundam, Dougram doesn't threaten the characters with superweapons which might end civilization at a stroke; it threatens them with politics and economics instead, which, over enough time, will have the same effect. Towards the end, the battles even start becoming ancillary to the gears that turn when a country gains independence.

Although it is No Export for You series, western mecha fans might recognize many of the combat armors under different names from BattleTech.

In 2021 Shogakukan's eBigComic4 Manga website announced that it will release a web manga based on this series, titled "Get Truth Fang of the Sun Dougram", on May 28. It is drawn by Yasuo Ohtagaki (The guy behind Mobile Suit Gundam Thunderbolt) and supervised by the original director of Dougram Ryousuke Takahashi.

Fang of the Sun Dougram contains examples of the following tropes: