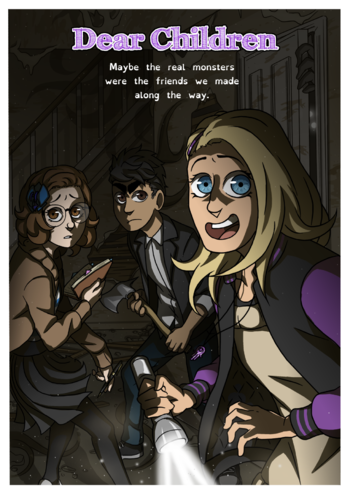 Three of our journalists (from left to right)— Chelle, Devin, and Cail — in their natural habitat.
"Oh come on, those anime titty pillows don't pay for themselves."
— Devin
Advertisement:

is a drama/mystery/horror/comedy Webcomic created by Mitchell Pepper and Kyle Holcomb.

Dear Children takes place in Hearthbrook, Massachusetts, a fictional coastal town, and follows Cailin Carver as a member of her high school's Journalism Club. Hearthbrook was once a tourism hotspot following a series of occult killings in the 50s. While this reputation has since faded over time, Cail and co. have decided to use the town's many urban legends as a way of promoting their club's failing newspaper.

However, things take a darker turn after the group investigates the bizarre suicide of a classmate that might ultimately reveal a very old, and very horrific, conspiracy rooted in their small town.

The comic updates (almost) every MWF, and is notable for (formerly) featuring music and even some voice acting (among other things) in its occasional flash animation pages.

. This lacks the multimedia features, but in compensation has a little more text content. With Flash no longer being supported as of 2021, it is now the only practical way to get a grip on the storyline, as the most important parts of the original were always the interactive Flash segments, which now no longer work. Sadly, this version ends with Chapter 3 out of the 5 ultimately released for the original.

As of the year 2020, according to the author's own comments on the series' Facebook page

, it's been put on indefinite hiatus due to low readership as the creators moved on to other projects.

(Cailin had said nothing about Devin being a "gnome fucker").