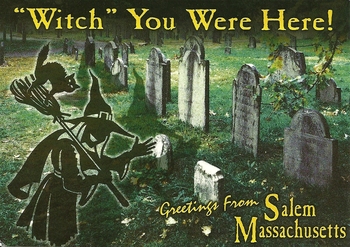 So what is Salem, Massachusetts famous for? Witches, of course.

Well, more accurately, it's famous for the witch trials of 1692–93, in which bizarre behavior amongst the town's children led to a massive outbreak of hysteria, which led to townspeople accusing their neighbors of being witches, which led to various arrests and trials, which led to a number of hangings. The episode is often held up as one of the greatest instances of mass hysteria and moral panic in American history, and the search for a reasonable explanation behind it has pointed to everything from an outbreak of ergotism to "People just be crazy, y'all."

At any rate, thanks to the trials, Salem has come to be associated with witches and witchcraft. These days, this means the city enjoys a renaissance amongst the neo-pagan community, who have set up shop there en masse. But in popular culture, it means that there are functional magic users, for good will or ill, who have been in Salem for quite a time, perhaps even dating back to the time of the witch trials.

If the author does not do any research about the trials, the people that were tried as witches will be shown as being burnt at the stakenote Those convicted were hanged while Giles Corey

was crushed to death because he refused to plead to the charges. or only women will be depicted as the victims of the Witch Hunt.note More of the victims were women but several men were also arrested and/or killed.

Use of this trope can be... messy. It can risk the Unfortunate Implications that the hysteria was actually justified. One or more of the following strategies are typically employed to ensure that the Salem witch-hunters will be portrayed as villainous even if witches are real:

A sub-trope of Hollywood New England. Some overlap with Lovecraft Country may occur; in fact, Lovecraft himself set some stories in Salem and in Arkham, a fictional town that's suspiciously like it (see below under Literature). Will often involve a New England Puritan, as these were the ones running the actual witch trials. Roswell That Ends Well is very similar, only with aliens instead of witches.