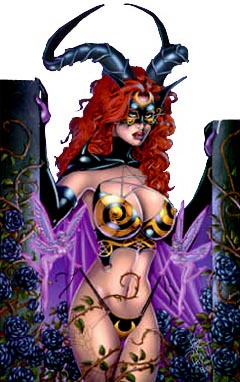 Tarot, somewhat overdressed by her own standards.
Advertisement:

Tarot: Witch of the Black Rose is a bi-monthly comic written and drawn by Jim Balent, coloured and lettered by his partner Holly Golightly, and published by BroadSword Comics.

It's the story of an impossibly-proportioned Action Girl witch named Tarot (Rowan by birth), living — inevitably — in Salem, Massachusetts, who is sworn to uphold the balance between the mortal world and the magical world and all that good stuff, usually while naked. Her on-again, off-again rival is her sister, Raven Hex, who occasionally wants to punish the mortal world for persecuting witch-kind (and causing the death of their father). Tarot's male love interest is Jon Webb, a cemetery caretaker who can communicate with the dead and uses the Secret Identity of "The Skeleton Man." Her female love interest is Boo Cat, a were-cat Genki Girl, who's also in love with vampire Licorice Dust.

Tarot: Witch of the Black Rose provides examples of: