The annual Three Shorts Halloween Episode starts with Fox Censor, the FOX network censor, editing this year's Halloween special to a TV-G rating (removing all the NBC-style sexual innuendo and CBS-style action violence), but the TV rating bug fights back by stabbing Censor until it reaches TV-666. Afterwards, the Simpson family enters the living room where they get executed on the couch. 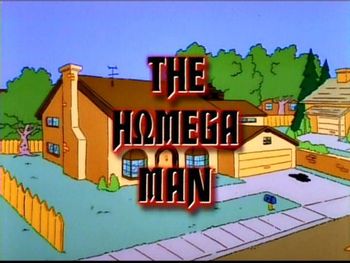 A parody of
Advertisement:
The Ωmega Man (aka the second film adaptation of I Am Legend). France threatens to destroy Springfield in response to a racist "frog legs" joke Mayor Quimby made, and Marge convinces Homer to look into getting a proper bomb shelter just in case. As it turns out, while he's inside one to examine it, the French see their threat through with a Neutron Bomb, and he emerges to discover he's apparently the last man in Springfield.

He indulges in all the town's leftover pleasures (such as watching a David Spade/Chris Farley movie in an abandoned theater, sitting in his boss's office [Deleted Scene only], and dancing naked in church) until a mob of Springfieldians mutated by the bomb (including Moe, Dr. Hibbert, Principal Skinner, Chief Wiggum, Krusty, Sideshow Mel and Mr. Burns) plot to kill him to get rid of the mistakes of the past for a better future. A car chase through town ensues, and Homer winds up back at his own house to discover his family alive and well — the house's multiple coats of lead paint created "the perfect bomb shelter." The mutants are touched by the reunion and Marge suggests the two groups can be friends — but it's a ruse to ensure the mutants' guards are down, as she and the kids promptly kill the mutants with shotguns. "Now that's the Marge I married!", exclaims the impressed Homer and the family decides to steal some Ferraris. 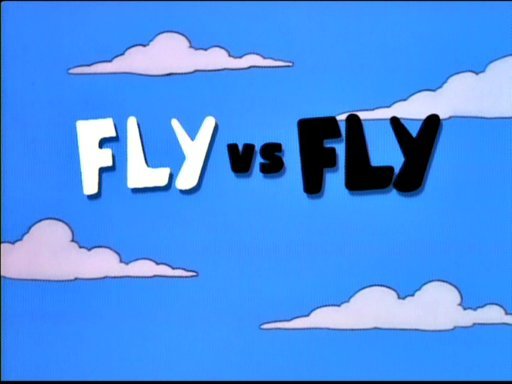 A parody of both the 1958 and 1986 versions of The Fly. The Simpson family attends Professor Frink's garage sale and Homer winds up buying a matter transporter. He promptly puts its two pods to good (to him, anyway) use and forbids Bart from trying it out for himself. In the middle of the night Bart tries to send Snowball II through it; instead both it and Santa's Little Helper go through at once. When Bart sees the result — two hybrids, one combining dog and cat front ends and one combining dog and cat rears ("Ewwww, you can be Lisa's!") he's intrigued by what would happen if he and an ordinary housefly buzzing past went through together...

Expecting to come out as "Superfly", Bart is disappointed to find that he and the fly's heads have been proportionally swapped. Still the undaunted BartFly heads out to cause mischief while grotesque FlyBart is reluctantly accepted by the other Simpsons, who believe he's the "real" Bart. When BartFly realizes that FlyBart's usurped his place in the household, he reveals himself to Lisa and she agrees to help him reverse the process. FlyBart attacks them both, but upon putting BartFly in its mouth Lisa knocks it into the transporter and both boy and fly are restored to normal. Homer, seeing what the transporter has wrought, grabs an ax and vows to do what he "should have done a long time ago" — and chases Bart around the house for playing with the machine. 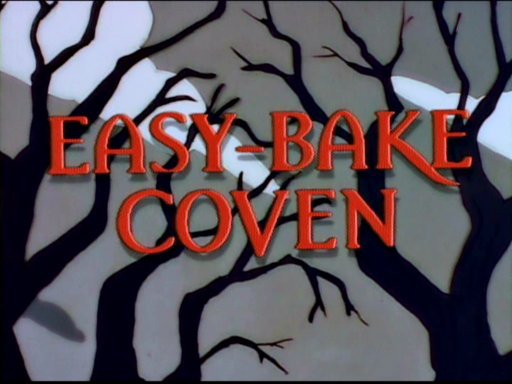 A parody of The Crucible. In 17th-century Springfield, the townsfolk busy themselves by finding and killing witches. When Marge is accused of witchcraft, she pleads innocent, so it's decided to toss her off of a cliff to reveal the truth — if she's innocent, she'll fall to her death, if she's guilty, she'll be able to magically escape. As it turns out, she is a Wicked Witch, and flies off on her broomstick to her family and the townsfolk's horror. At their mountain hideaway, Marge reunites with her sisters/fellow witches Patty and Selma, and soon, thanks to eavesdropping on the Flanders, they head out to find some delicious kids to eat.

The Flanderses find themselves a target of the witches' intent, but before the threesome can haul off Rod and Todd, Ned and Maude offer them gingerbread kids instead. The witches find the cookies sufficiently tasty and spare the Flanders children, wishing they hadn't filled up on kids at their previous stops. According to Captain McAllister, placating witches with treats was the origin of trick-or-treating, and the following year kids all over town happily go door-to-door for goodies. Homer, on the other hand, decides to egg a house — which Lisa points out is his own. So he accuses her of being a witch and a mob promptly runs her out of town.