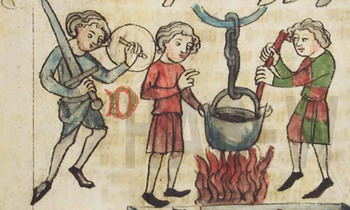 Ordeal of boiling water from a Sachsenspiegel manuscript (1350-1375)
He whom the blazing fire burns not, or whom the water does not throw up, or who does not speedily suffer some misfortune, should be regarded as pure on his oath.
— "Verse 8.115", Manusmiti
Advertisement:

Trial by ordeal is the determination of guilt or innocence by using ordeals, or experiments going from merely unpleasant to potentially fatal to always so. Then the outcome would decide the guilt, basing on whether the accused survived, stayed unharmed or if any injury healed. It was claimed the gods would intervene to show who's guilty or to protect the innocent party.

The most common exemple was during witch-hunts, where accused were thrown into water, with the ones to float being the guilty ones; some described the process as Morton's Fork.

Before the advent of modern forensics, means by which crimes could be investigated were scarce, meaning alternative methods had to be devised.

In fiction, they can be of the following types:

See also Trial by Combat and Only Good People May Pass.