Literature / I Am Legend 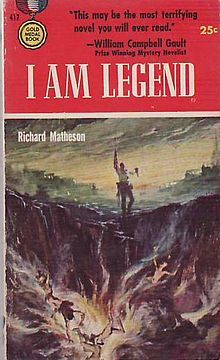 "On those cloudy days, Robert Neville was never sure when sunset came, and sometimes they were in the streets before he could get back."
Advertisement:

A 1954 novel by Richard Matheson. Set after an outbreak of a viral plague that turns both living and dead into creatures resembling vampires, the plot follows Last of His Kind Robert Neville. An immune survivor, Neville spends his days hunting vampires, scavenging and struggling with loneliness, and the nights being taunted by undead vampires that keep swarming outside his house.

Essentially the Ur-Example of the Zombie Apocalypse genre, though it predates that particular usage of the word "zombie" by 24 years or so, which was first used in Dawn of the Dead (1978). It was adapted to film four different times:

None of these movies used the ending of the original novel: the first (starring Vincent Price) is the only one even close to rest of the story, with the others being comparatively loose adaptations.