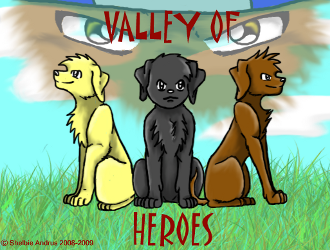 From left to right: Sandy, Midnight and Olet. Oh yeah, and Manjo in the background.

In 2008, YouTube was flooded with amateur fananimations of cats, specifically Warrior Cats made by preteens and kids of all kinds. But in June that year, everything changed when a fellow animator named Silver The Puppy released the first episode of a new series called Valley of Heroes.

Valley of Heroes is an ongoing Web Original cartoon (sometimes known as an "anime" by the fandom) which revolves around three labrador retrievers who create a pack that they will use to fight against Manjo, a Big Bad stray with a pack of his own. Just watch!

Valley Of Heroes contains examples of: