Blood from the Mouth 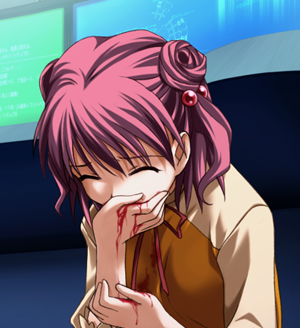 "Ohh, that can't be good."
"Thou lov'st me not; for, brother, if thou didst,
Thy tears would wash this cold congealed blood
That glues my lips and will not let me speak.
Come quickly, Montague, or I am dead."
— Warwick, Henry VI Part 3, Act V, Scene 2
Advertisement:

A character is either dying or badly injured when they start bleeding from the mouth.

In Real Life, coughing blood can indeed indicate life-threatening damage. One of the scientific names for this symptom is "Hemoptysis."

It can result from organ and tissue damage from disease or trauma; punctures in the respiratory and gastro-intestinal tracts; and massive trauma to the body as a whole. This is an especially big warning if the lungs have been punctured, as the victim can drown in their own blood if not treated. As a death trope it's caused by any fatal injury, and is less a symptom than a signal to the audience that this dude's a goner. Much like the chest-clutching and doubling over in days of old, Blood From the Mouth is a sign of death that won't horrify us with the specifics, keeping our focus on the story itself.

However, not all Real Life bloody mouths are immediately dangerous. Damage to the gums in a fistfight, biting your tongue, or a particularly copious nosebleed can just as easily replicate the appearance. When it's not a death trope, blood around the mouth simply indicates the character has just taken a worse beating than usual. Our hero gets smacked around some and ends up with a bloody lip - not a big deal unless there's staggering involved. They might even spit out the blood defiantly, along with a tooth, just to showcase their resolve. Was that hit fatal? If the character wipes the blood away and it does not return, it's cosmetic Blood From the Mouth. Expect to hear My Name Is Inigo Montoya any second now.

Not generally related to the Psychic Nosebleed; combine the two and get Blood from Every Orifice. If it's the only sign the character gives that they're injured, it's a Mortal Wound Reveal. Blood from the mouth is also an increasingly popular way to show damage taken from a Deadly Upgrade, or over reliance on a Super Mode.

A stream of blood trickling from the mouth is also shorthand for "I am a vampire", because vampires drink blood and are commonly depicted as having poor table manners.

As this is a Death Trope, all spoilers will be unmarked in the examples below. Beware!