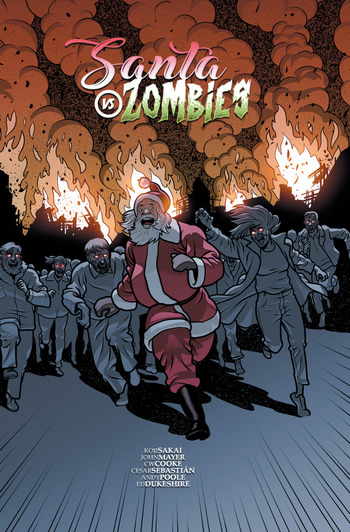 Santa Vs. Zombies is a Zombie Comic Book by Koji Sakai, John Mayer, and C.W. Cooke.

It's Christmastime, and the must-have gift isn't a new toy or video game (console) this year. Oh no, it's genetically-engineered kittens that never grow old. Everyone wants them, and demand is high. What nobody knows, however, is that one of the creators of this new craze has sinister intentions in mind for it.

Meanwhile, Santa Claus has lost his love for the Christmas season. Every year it's always the same ol' routine. Travel the world, give presents to good kids, give coal to naughty kids. What he needs is a change of pace. Well, he's going to get it... in the form of a zombie outbreak overtaking the city.

So now, Santa must team up with a couple kids and their single mother to save Christmas, and put an end to the undead menace.

Santa Vs. Zombies contains examples of: