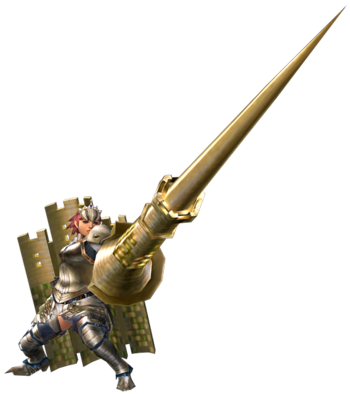 Careful, could poke someone's eye out with that.
Advertisement:

The jousting lance is the iconic weapon of medieval knights and is the Weapon of Choice for many fictional characters with a knightly theme, especially if they also wear heavy armor (be it plate armor or a futuristic version), carry a large shield, and ride a horse or its modern/speculative fiction equivalent such as a Cool Bike, dragon, or Humongous Mecha. If a user of this kind of lance has a Rival or Arch-Enemy, expect the latter to be given the same weapon so they can settle their issues with an old-fashioned joust. Swords, axes, and warhammers all have their place, but nothing quite beats a big pointy object designed to penetrate your target by charging at high speed.

The modern manifestations of this trope are sometimes characters who use the jousting lance as their main or only weapon even when on foot, the implication being that they can run or fly as fast as a war horse.note Dismounted use of the lance isn't necessarily as crazy as it sounds. Running at the target on foot in order to practice control and aim was actually the first step of learning to use the lance on horseback, since it removed the distraction of the horse's up-and-down movements. The trainee might progress from that to riding a wooden horse on wheels pulled by their friends, and lastly the real horse when they were ready. Starting in the 14th century, knights sometimes dismounted before a battle in order to fight on foot, in which case they would cut their lances down to a shorter length and use them two-handed like spears. Expect to see Slice-and-Dice Swordsmanship with or without modifications to the weapon's basic structure — which is far more appropriate for stabbing — but lance masters can often jab with impossible speed and armor-piercing force even when one-handing the weapon. The epitome of this artistic license is the character whose lance is effectively a rapier of BFS proportions.

Lances in animation and videogames are often far more massive and thick than those of the Middle Ages and Renaissance, resembling nothing so much as a giant conical spike on a stick, and often have fins or spikes encircling them. You might see an engraved drill-like spiral pattern. Furthermore, not only the tip but the entire lance is often depicted as being made of metal. In real life, designs like this would make it too heavy and unbalanced to use as a lance. The aforementioned 'giant metal spike' design also often has the problem of an excessively tapered and needle-like point, which realistically would either overpenetrate when used on a soft target or clinch uselessly upon hitting armor. At least that kind of stuff looks really cool, and the practical issues might matter less if they were being wielded by Humongous Mecha or humans in Power Armor. Lances are also often depicted as multi-use weapons, where in real life they were somewhat disposable. Wooden lances might break on impact and would become too unwieldy in a tight melee, at which point a knight would discard his lance and draw a short weapon such as a sword or mace. See the analysis page for more historical information.

Despite the trope title's knightly implications, this trope is actually Older Than Feudalism, with the Parthian Empire providing some of the first examples of a heavily-armored lancer cavalryman called a "cataphract" many centuries before the social class of knights ever existed. Additionally, for much of history prior to the adoption of the stirrup, lances would have been held in both hands for many cavalrymen unlike the typical Medieval knight, as a rider without stirrups wouldn't be able to keep their balance effectively due to the length of a lance.

Characters with centaur-like forms are effectively always 'mounted', which makes preference for this weapon a bit more plausible. Other weapons would still be more practical in most circumstances as they were for Real Life human cavalry.